If you’ve been asking yourself this very same question then come on over and chat with me for a while. As a self-proclaimed commentator, bike blogger, all round tosser and famously tight-arsed shopper I couldn’t resist buying the K-PEDC pedals straps on eBay.

If you’re fussy about your straps, have a brand you love and trust, or have $80 burning a hole in your pocket, then go talk to Colin. But if you’re a beginner, a tight-arse, or want to find out if straps are for you without laying down $60 then stay with me a while.

Apart from the really terrible name and some quite awful colours, the K-PEDC straps are a good set of straps. At a ridiculously low price. I think I paid $5. But you can get them cheaper. 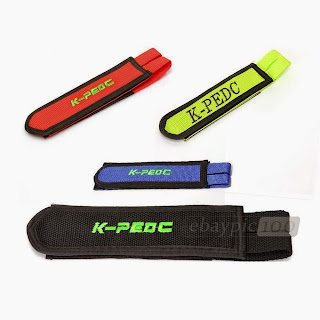 Yeah I really thought fitting the straps needed its own sub-heading because it takes about two minutes and they pretty much work any which way you put them on. We’re not deciphering Tony Abbott’s stand on climate change here, we’re slipping two bits of webbing through the bottom parts of our pedals and velcroing them to the main body of the straps.
Like any pedal straps you’ll need to adjust the K-PEDC straps to fit your feet. If you’re a beginner then don’t make them too tight. Sure, you’ll rock much better skids if you tighten them a bit, but I’m more worried about you getting your feet out in time for traffic lights right now. Leave them loose for now and you’ll have plenty of time to tighten them when you go pro. Remember to wear your riding shoes when you’re adjusting the straps. Don’t get them just right for your Doc Martins only to discover they don’t fit the Vans later on.

Riding With The Straps

It’s not easy is it? I mean, getting your feet into those straps. With the wheel rotating and the pedal trying so hard not to be conveniently available for your feet. And once you start gathering some momentum it gets even harder.
This is where cages probably have an advantage. The weight of the cage makes the pedal sit at a bit of an angle, making the pedal just that little bit more available for your feet. The leading edge of the pedal is pointing toward you somewhat, waiting for your foot to stroke it into place and slip your sneakers home. With straps the pedal hides from you. Like a shy first date and all you can think about is getting it in. (I think that similie turned ugly.)
The fixie can work against you here. You’re trying to get the straps to sit up and the pedals keep turning and you miss your turn and you’re around again for another turn and you’ve missed that one and now you’re gathering speed. Fark! Frustrating. But the fixie can also be your friend. You are fixed you know? You can lean back on the pedals and slow the whole thing down. You can practically stop the bike and slip a foot it. I’m telling you this because I remember trying to learn this and finding it a bit hard. I’d grown up with straps and cages and then clipless and I thought I had that shit nailed. But back then the pedals weren’t moving. Well I learned to slow the bike down and slip in at my own pace.
But you’ve gotta practice. There are places where you can’t dawdle. You want to get off at the lights in front of the cars. And there are places where it’s not so easy, uneven ground for instance. And practice your track stands (because you don’t want to take your feet out of those straps all the time do you?). You’ve got that shit nailed already right? But what if you’ve got to do it in front of a row of cars with your feet locked in?

After you’ve stomped on your straps a few times while trying to get the hang of straps they don’t sit up and beg like they used to. They’re lying flat and limp like…no I think I’ll avoid any similies this time round. They’re flat and it’s hard to get your feet into them. And this is partly the problem with cheap straps. Yes, well not so much with these ones. I was pleasantly surprised. There’s a fair bit of material in the upper strap and it is decently thick and robust. (I’m talking about cheap straps here so I’m not giving them the same expectations I would a more expensive product.) They maintained their shape quite well and I have not had problems getting my feet in during the “test period”. (Please note that the term “test period” denotes a duration of about three weeks, after which I changed my handlebars, stood back and thought, this bike needs a freewheel. And at that point I ditched the straps too.)
Given the brevity of the Test Period (which is similar to Cretaceous and Paleogene periods, just a hell of a lot shorter), I can’t really tell you too much about how these strap respond to wear and tear. I can tell you they appear to be decently well made. And they cost $5!  There are a few threads coming loose on the straps. I’d suggest running over these with a lighter to prevent them unraveling too fast. 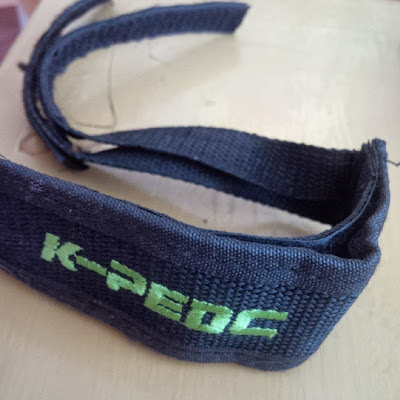 The K-PECs don’t exactly give the impression they’ll last a season as a bike messenger. And they’re not not exactly the most rigid straps in then world. I’m assuming you’re a straps newby testing the straps waters. For that they give good retention and you’ll find you get plenty good leverage against them for practicing your skids. If you’ve not had straps before then these will be a massive improvement over open pedals. You’ll suddenly realize why everyone can skid and you can’t.

Pedals straps aren’t the most technologically advanced piece of gear in the world. Anyone with some 1,000 denier cordura or similar product, some velcro and an industrial sewing machine could knock out a set quick smart. According to the last population study I did on China (read: I’m making this shit up) there are about a million and plenty of these in the Dim Sum area alone. Of course, things can always get lost in the translation. What do they know about fixies in the Dim Sum area, where Flying Pigeon’s are coveted like next years Audi? In this case, apart from the awful colours and the godawful name (what is that, some kind of pedophile ring?) the translation has been pretty good. If you’re new to straps and don’t want to invest too much, but at the same time you’re wondering if a $5 anything can be half decent, then fear not and press the Buy Now button on eBay. These are some damned fine straps. For $5. Either these are a gateway strap for beginners and you move on and get a brand name or you’ll re-invest your $5 in another pair when these wear out. Either way you’re coming out well ahead.