Skip to content
I’m going to say it. Reclaim Australia is not racist. In the same way my anti-gear group, Reclaim The Bike, has nothing at all to do with my almost pathological hatred of roadie scum.

My concern about gears is they represent a tax on cycling. Any idiot can see that. Have you ever looked at the price of a geared bike next to a single speed? The gear lobby is asking us to pay this gear tax just so we can get up hills without busting a knee joint. If that’s not an attack on cycling and the fundamental freedoms of our cycling lifestyle then I don’t know what is.

When I see something like this SixFyx conversion from Fixation my blood boils. Now they’re trying to force us to add gears to bikes that don’t even need them. 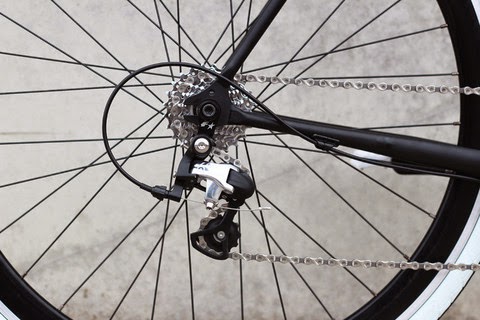 At $US250  for the unit that’s almost as much as a decent single speed from one of the online retailers. That’s the kind of gear tax that disgusts me most, where decent middle-road commuter folk are being asked to upgrade unnecessarily just because a certain portion of society want gears.

You see roadies out there with their gears and their lycra and you can just tell they don’t care for the rest of us. They’re oblivious to the simple pleasures of meeting your mates down the pub for a few and riding home. They drive to designated meetings with their “clubs” and ride in groups. They’re always in groups, like mobile lycra-clad ghettos. They sneer at us just because we don’t have massive thighs or the VO2-max of a horse. All the while they’re looking like signage boards for companies they pretend not to represent, such as Blanco and AG2R, who are little more than fronts for funding gearing extremists. They disgust me and I hate them.

But that of course has nothing to do with Reclaim The Bike. This is about a cycle tax, which is an attack on our freedoms and our lifestyle. I just got a  sidetracked there for a bit.

What concerns me is that we’re funding these people’s atavistic lifestyles, terrorists such as the Hellride fraternity in Melbourne. These people have killed and will surely kill again if we keep funding them. If you don’t believe that gear money is filtering down to these people then just look at the price of Specialized S-Works road bikes. Case closed.

People have a vested interest in keeping this kind of information from the general public. Organizations like ours can only shout “fire” and hope someone some-day understands. In fact, I shouted “fire” in a busy department store the other day and in the ensuing panic I was grabbed by security officers and later charged. It’s this kind of attack on freedom of speech that all Australian’s should stand up for regardless of where they stand on the gearing debate. Or fires. If we can’t protect those who abuse and dishonour basic freedoms like these then we’ll surely find other freedoms are taken from us next. In fact, I wouldn’t be surprised if the majority of cars already have gears.

A boycott. This will solve the problem. Boycott every store that sells gears and geared bikes. It’s possible that many good and honest people who own these stores will be disadvantaged by being unable to compete in the gear market. Sure. I don’t think that should concern us. Why should we worry about hard working family men and women who are forced to abandon a large part of their market just because we don’t like gears?

It’s because the gear tax is supporting extremist and terrorists, as I have show you above, that we have to take this stand. I understand how some people will think I’m just raving on and gears aren’t a tax and the money isn’t funding extremists. To those people I say, wake up. Join the fight. Just try not to look like these guys below from Reclaim Australia. Even with freshly pressed shirts they really do look like a bunch of racist thugs you know.