Skip to content
It’s a beautiful morning but there’s no coffee, so I still can’t go for a ride on my $3,000 fixie. I’ve got tea I suppose, and lack of coffee didn’t stop the poms from conquering undefended nations and calling it an empire. So I probably could ride anyway.

Oops, sorry, I’ve pulled one of the pictures from their website gallery and inadvertently grabbed one without a bike in it. Kinda gives the impression that the Metropolitan is a victim of style over substance. Which was not the impression I wanted to give at all. Here’s another picture, this one on of a naked chick and a bike, so you’re know they’re for real this time:

Some of you might have spotted the missing down tube. They didn’t actually forget. That’s just a subtle indication of the kind of cutting edge design and technology represented by this bike. They even have a whole section on it on their website. Here it is:

I know what you’re thinking. A picture isn’t exactly a exhaustive summary of design and technology. But it’s not like it’s their only picture! And how cutting edge are those handlebars? And there’s no downtube. Words can’t (and don’t) describe what amazing design and technology has gone into this bike.
The good news is you can get one for just 3,700 euros. Given the state of the European economy that’s only a bit over $3,000. (If Germany would stop bank-rolling the European economy we’d buy a nation with that money by now.You get Portugal and I’ll get Spain and we’ll be neighbours and wave at each other across the border. I get flamenco and Basque separatists and you get the National Horse Fair and marine stingers. So we come out about even.)
The Metropolitan is a fixie so it’s pretty much a pub bike really. Just with less locking opportunities.
Perhaps for some of you $3,000-odd dollars is a lot to spend on an urban commuter and pub bike. As a cashed-up blogger I’ve pretty much got two of these bikes already. What I want to say to put your mind at rest is these bikes have an industry leading 2 year warranty. That’s almost as much as Reid’s lifetime warranty. (It just depends on how long you live really.) And at barely 10 x the cost of a Reid Harrier it represents amazing value.
If you think 3 grand is a lot then maybe you should check out these spinny things. These guys are wanting just $54,800 to start making these. 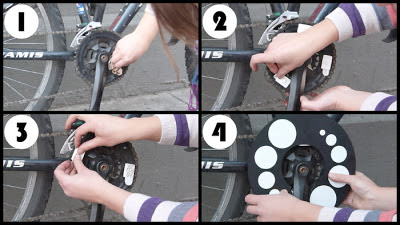 Or you could just give me $2 and I’ll knock out a set with some plastic and zip ties.