Yes Bikes new bike is in some ways a continuation from the previous bike but in other ways it’s totally different. Styling cues have been brought over from the old bike, the slab-sided aluminium frame, the Yes logo on the down tube, but the DNA is very different. Whereas the old bike invited you to play and freestyle with the bike, this one invites you to put your head down and go fast.

The bike’s tendencies are obvious in its stance, with the lows-hung bullhorns inviting you to get low. Getting low and driving hard mean different things in different settings though and this bike is meant for riding in traffic, not race tracks. The cockpit is sensibly relaxed when you have your hands on the cross tube of the bars. It’s relaxed enough for me to doodle along with my wife or run the dogs on a lead. But when you drop down this bike feels fast. Like Speedy Gonzales.

If you’ve read a few reviews of mine (then I pity you) you’ll know I hate weights, measurements and quantities. Because they’re boring. So I didn’t weigh the Yes. And if I did I’d have nothing to compare it to anyways. But it’s definitely a light bike. Not Cat 1 “Are you sure this is UCI legal?” light but light when compared with other bikes I’ve ridden. And it rides light. Some bikes just seem to get off the line quickly and accelerate better. Perhaps it’s in the gearing too. Whatever. The Yes always made me feel like I was quick. Which is no mean feat. 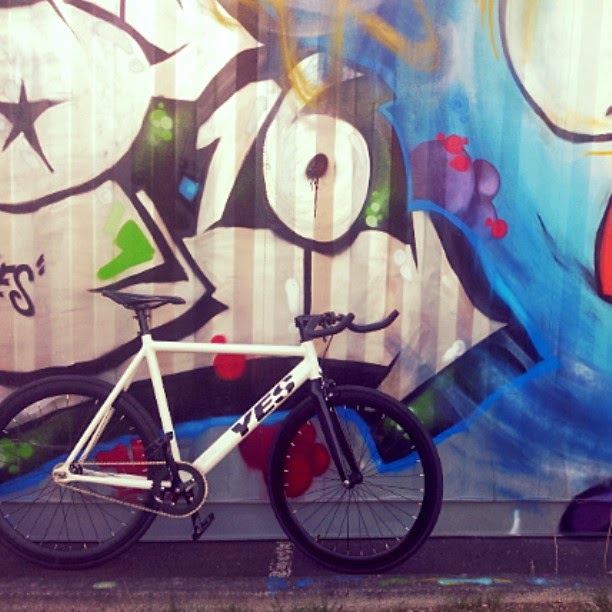 I’m sure there are other elements helping there too. If you check out the bottom bracket area you’ll see there’s a lot of metal coming together down there. That’s got to translate to a stiff frame with good transfer of energy. There’s also a sweet set of Sugino Pista cranks making sure nothing’s lost in translation. 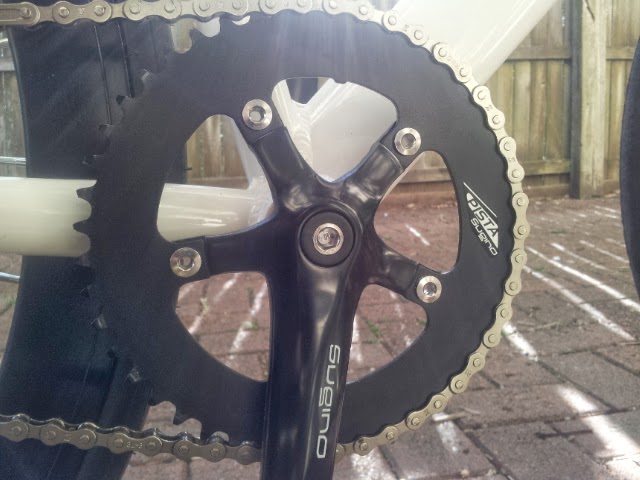 The aluminium frame no doubt helps to keep the weight off and the carbon fibre forks help too. Having said that you get the feeling that neither were selected with weight as the ultimate priority. You get the feeling that the bike’s built to take some punishment. It’s a day in day out bike not a special weekend ride bike. Just with show pony good looks.

As I said in my last review of the Yes, you can argue about different characteristics of aluminium against steel. In practise there’s often not much between them in terms of ride quality. Especially if you’re got 22mm tyres pumped up to 110psi. (If you’re really concerned with ride quality get some size 28s and run them a tad softer.) I never even noticed the ride quality of the Yes when I was on it. The carbon forks no doubt help it ride nicely (though as I mentioned, they’re hardly your svelte types) but in the end who cares why it rides nice it just does. Okay? Again, as I said in the last review, it really comes down to whether you like the look of it. Lets face it, we make some massive compromises with our bikes for the sake of looks. I’m riding around with wooden handlebars for crying out loud. If you like having the big slabs of pearl white tubes on your ride then you’ll like the Yes. And the ride will make you happy.

Welds on the Yes are looking great. It’s a different experience, having aluminium tubes to look at as compared with steel. The small neat welds of steel  are replaced with big muscular welds of aluminium. I like that Yes have no effort to hide them. They’re a tidy bit of workmanship so why bother. They stand out plenty with the pearl white paint and if anything have become a feature of the bike. 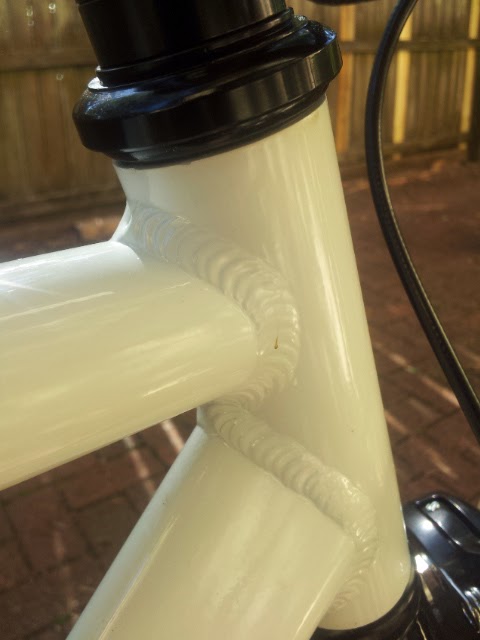 Component choice on Yes is all good stuff. The brake (front only on my tester) was plenty good, and bars, seats, seat-posts etc were all quality items. I especially liked the seat and the seat post. Seat posts are usually overlooked but this guy had a nice two bolt micro-adjust unit. The seat was handy too. Seats are a matter of preference but my butt preferred this one: 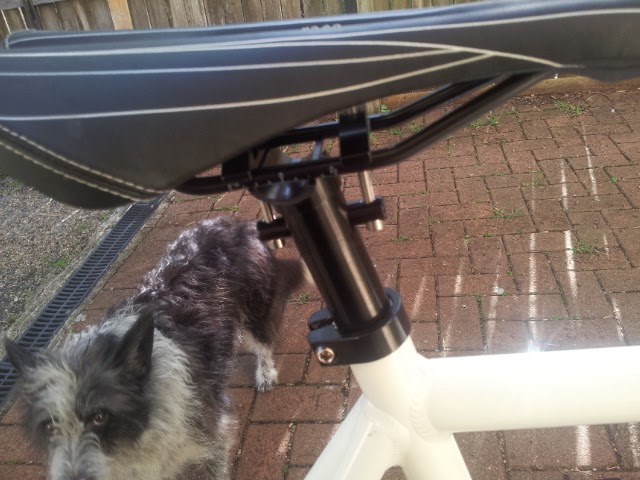 The dog has no preference.

One of the benefits of buying at this end of the market is the brands don’t have to make so many compromises over the little things. They’re free to make decisions over component choices that factor in more than just cost. So you get some intelligent and stylish touches like the rear hub with it’s rounded nuts secured to stainless steel sliding drop-outs: 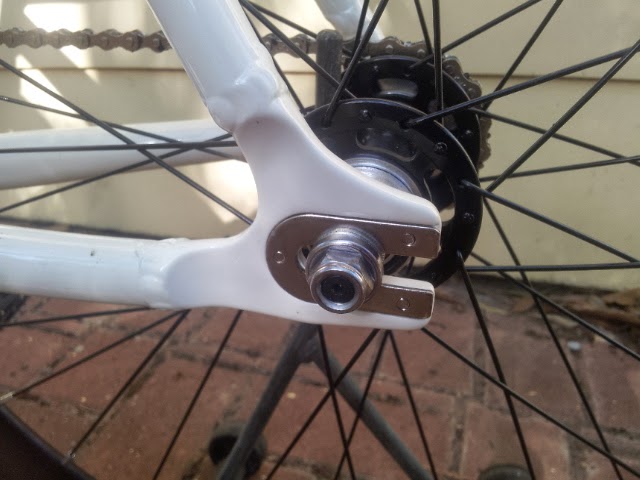 The whole rear end looks fabulous and is a real highlight of the bike. The wheels are laced with stealth black spokes to wide black rims. An interesting touch is the extra-long nipples. You can’t see them in the photo but they’re about an inch long, which translates to about yay big (hold fingers apart) in metric. Many of the styling cues on the Yes are subtle, with a black on white aesthetic dominating, but the overall impression is a great looking bike. Small touches like the long stainless spoke nipped and sliding drop-outs offset the style and provide visual interest.
With everything finished so beautifully and the rear end so perfectly finished it was disappointing to see the front end hadn’t seen the same forethought. The effect of the sleek black carbon fork is spoiled by the ends of the axles protruding out past some ungracious looking nuts. I know it’s how all other bikes I’ve tested are finished but on this bike it stands out as being a tad graceless. With everything else so beautifully finished I’ve have loved to have seen the front end shown the some care as the rear. 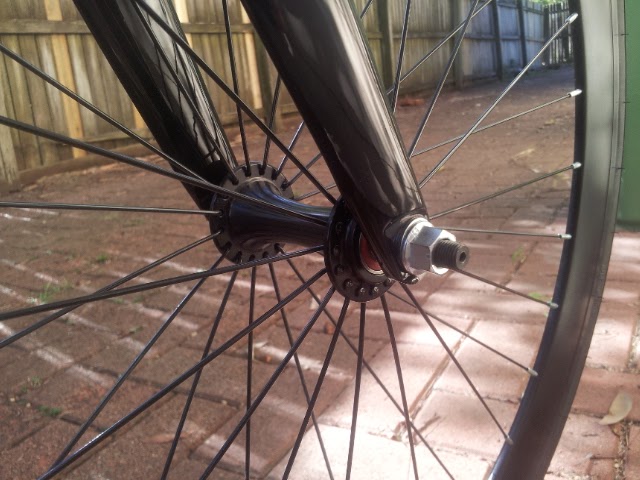 It’s probably a sign of how well the bike is finished and how great it looked that I  even bother complaining about something that is common on other bikes. It’s always tempting to change things on bikes. In fact some bikes are bought by their owners knowing they’re going to update them, like the Chappelli featured recently. The Yes is a bike that doesn’t invite upgrading because it’s already pretty much spot on already. Except maybe that front axle.
I hardly ever mention peddles in my reviews because they’re usually pretty awful. This isn’t necessarily a bad thing. Peddles are one of those things that cyclists usually have strong personal preferences for. I know I’ve bought bikes only to throw away the peddles day one, even a tidy pair of Time peddles. The exceptions are the bikes that come with a peddles the likes of the Yes. They’re Yes branded peddles and they’re bang on for this bike. Ready for some straps, they have plenty of grip and look great. No need to go peddle shopping after you buy this bike. I’d be happy to see these fellas on any bike I own. 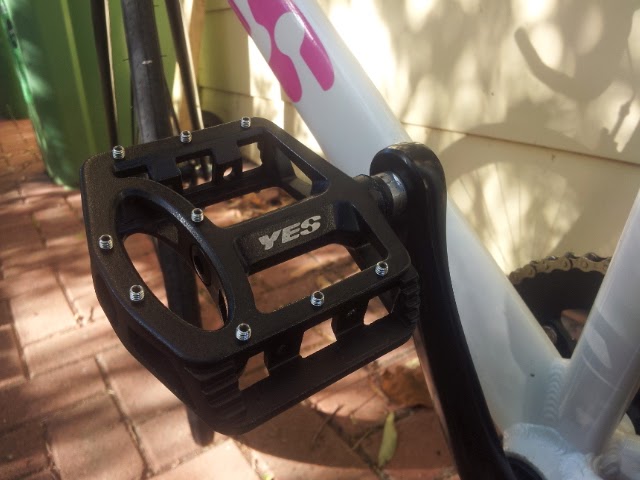 Most of us will make compromises over the function of our bike for the sake of form. (Except me. My wooden handlebars are all about superior dampening and all-weather grip.) Form and function can come together though as is the case with the Yes. Everything works together as is should, comes together with a functional cockpit with some good looking and versatile bullhorns. In relaxed mode the brakes come to hand quite nicely. I did wonder about the wisdom of hanging the lever so low but thankfully decided to give it a go before I moved it. It works just fine where it is, with the hand on the hoods position giving easy braking. Then when you drop your hands into the curves of the bullhorns the brake levers peaks around the corner and are still very available. Once you’ve got your hands stretch onto the straight bits you’re on your own though so hopefully you’ve got your fixie skids down pat. I can’t skid for shit so I was always a bit wary of stretching out in traffic. When the coast was clear it gave a good fast position. I’m not a big fan of drops so for me the bullhorns present a better option. In the end they’re there because they look great and complete the look and intention of this bike. 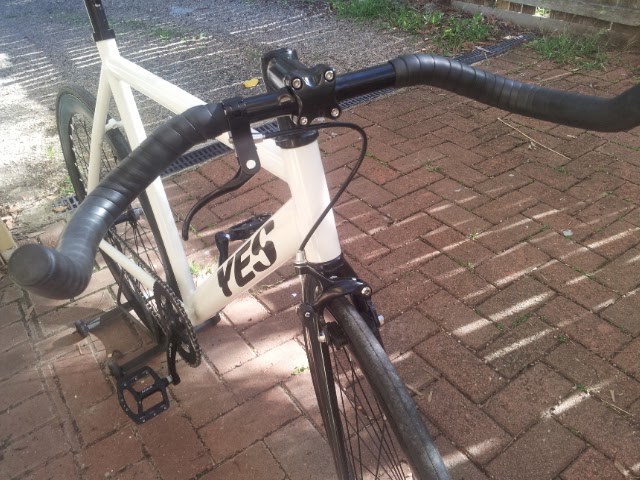 There’s a lot to like about the new Yes and very little to dislike. It’s come from a different direction from the last bike from Yes. That bike confused this poor brain addled tester and perhaps confused the market too. I hope not. There’s room in our market for all types of bikes. What’s for sure is the intent and purpose of this bike is very clear. The styling is pure fixie and whether you run brakes or not this thing is at its core a fixie. It’s a fixie you can roll out on day one without changing a thing. Whether your  intention is to impress your mates, show some style, hit up the city traffic, or just hang at your local, this bike is comes out of the box ready to show some style, show some speed, or just show-up your mates’ tired old rides.