Skip to content
A friend of mine handed me a flyer for ecobamboobikes last week. As someone who is convinced he can make anything with enough bamboo and zip ties I feel I’m well placed to comment on anything that someone else should make out of bamboo. To be sure, the bamboo and zip tie chicken shed wasn’t a great success and the dog knocked down the bamboo fence too many times before I made it substantial enough to be mongrel proof. But still, I count myself as something of an expert.

As far as my limited knowledge of bamboo bikes goes Calfee was the first to make bamboo bikes.

Story has it that Calfee made one to take to a handmade bike fair, people liked it and started ordering them. Turned out they actually rode quite nicely so more orders come in on the back of the good feedback from the first lot. Etcetera.

Calfee Design offer this down-to-earth blurb for those considering using bamboo to make their next fixie:

Frame and Bike Pricing.  There are many good reasons to choose Calfee Bamboo for your next bicycle frame. Calfee Bamboo bicycle frames are very stiff, transferring power efficiently; are durable, resisting damage from stress and impacts; are comfortable, surpassing aluminum, steel, titanium and most carbon frames in smoothness.  Consider this October, 2011 review of our Bamboo Adventure in Mountain Flyer Magazine.  Our bamboo tubes mitered together and bound by epoxy soaked hemp fiber create a frame whose most notable characteristic, beyond beauty, is this incredible vibration dampening

All sounds good: stiffness, transfer of power, comfort…no mention of being able to chop it into small pieces with a tenon saw and a spare five minutes.

Let’s compare that to the boys and girls over at ecobamboobikes:

The world is rapidly changing. The environmental crisis is among us and is in desparate need for a change. This has set up a challenge for us to redefine our role in this world. Rather than an obligation, it is an opportunity to improve our lifestyles . We need to go back to our roots, taking with us the positive things we learned. It is this way that we will create a new sustainable future that will be in harmony between man, society and nature.

My challenge is to read that without redefining what I know about the English language. I know I shouldn’t be mean to earnest and well-meaning people but…come on…”the environmental crisis is among us”? Does it stalketh the unwary? Does The Crisis drive an SUV and carry a sickle and wear tattered black robes?  Must I go back to my roots in order to avoid The Crisis? For heaven’s sake, I come from Glenroy!
Thankfully, there is a way to fight The Crisis on its own terrain. The Crisis hates bicycles in general, I suspect, but is especially fearful of bamboo bikes because bamboo bikes are made of an over-grown grass that grows quickly just about anywhere, including my back yard. We can ride our bamboo bikes into battle with The Crisis, having fashioned bamboo into sticks to beat The Crisis and stakes to run through The Crisis’ vampire heart. And it shall walk among us no more.
Interestingly, in an interview with Treadlie magazine owner of Cognitive Cycles in Melbourne (this or this, same site actually) said you could make many claims about bamboo bikes but he personally held back from saying they were eco/green because the carbon fibre lugs made the bikes less eco than a steel framed bike. Of course, when it comes to all this environmental stuff, it all depends on how you do the accounting.
ecobamboobikes may not use carbon lugs but it’s actually hard to know. Their website doesn’t tell you too much about anything (except about The Crisis that lurks among us). The lugs don’t look like carbon. Their parent website, Masuelli, has only this to offer:
ecobamboobikes also use energy saving techniques. I assume these are the same techniques I use, such as pulling up a stool to sit on while working and keeping all my tools close to hand.

Despite my piss-taking I would of course love a bamboo bike. What could be better than riding down the shops on a fixie made of grass? In a country where riding a bike looks like a dangerous act of subversion, riding a bamboo bike would be like poking a wild animal with a stick. The hatred from my fellow road users, those cars and those truck things we call SUVs that seem to fear and resent me enough already, would be palpable.

What I think we can draw from the pages of ecobamboobikes.com is that they’re earnest and well-meaning bike people, not copywriters, and I guess that doesn’t devalue their product. On the other hand, it certainly doesn’t add value because for nerds like me there are too many unanswered questions in that website.

Down in Melbourne is Cognitive Cycles, mentioned above, who are turning out their own bamboo bikes from a small workshop in Sydney Road. Their website has a charming candor and gives the distinct impression that they have only so far build three bamboo bikes. The fourth frame developed cracking and had to be pulled down. This gives the impression that building bamboo frames is as much a hobby as a business. Their first creation was Maisie:

It’s difficult to understand, on a rational level, why you wouldn’t extend those carbon lugs and just make a full carbon bike. On a more abstract level it though it’s easy to see the attraction of such beautiful and unusual bikes. If it wasn’t for all the obvious problems (how could I afford one, who would follow me round to keep it safe while parked at Coles) I’d probably get two.

Bamboo bikes can be unique and beautiful bikes. I suspect though that if you want to be the first on your block with a bamboo bike you better get moving. They’re popping up everywhere. Treadlie magazine finds it hard to go a whole issue without a smattering of bamboo bikes on its pages. You can even buy one on ebay for $350:

Their approach is simple and reasonably pretty, though the bamboo does come across being a bit of a token inclusion and the look of the thing suggests it was made in a factory somewhere in China. Still, it’s a cheap way to be the first on your block to own a bike made of panda grass. I know I’d stop in my tracks if I saw one. Could this be the cheap way of getting the attention heretofore only reserved for Lamborghinis?

Curiously, there’s a company in the US called Panda Bicycles, that claim “Panda Bicyles are the only steel lugged bicycles in the world.” Either they don’t get around on ebay very much or the frame above has lugs made of some  other kind of metal and the Panda Bicycles bikes are really and truly unique after all. Their bamboo fixie looks a lot like this:

This bike is called The One because you need Jedi like skills to make it stop due to the combination of front-only braking and rear freehub. Most people would either ride freehub and rear brake or fixed hub with no brake but the Panda guys were on more than just Panda grass that day and decided for the unique front-only braking system. Maybe they could more accurately write on their website, “Panda Bicycles have the only fixie in the world with absolutely no rear braking.”

Impressively, Panda Bicycles offer a 5 year warranty. I doubt that’s a crash damage warranty of course.
With all this bamboo talk, the question arise, if we’re all riding fixies made of panda grass, what are the pandas riding? The answer is this: 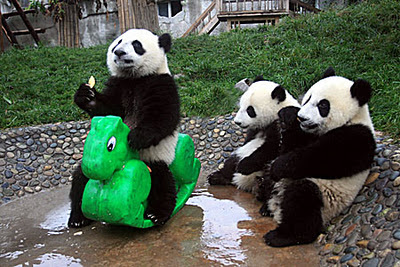