Skip to content
The soundtrack to today’s blog is provided by Johnathon Richman. We’re going faster miles an hour.
Just supposing I wasn’t from a generation that remembered Johnathon Richman and drank sweet milky tea while blogging about riding. Just suppose I was of an age when I might knock back an energy drink and watch fixie videos for inspiration before busting some of my own moves, just supposing that, then just what the hell am I watching? Just what is keeping me engaged? Fixies are brilliant to ride sure, but they always looks so damned lame on video.
And you know why it is? It’s because we’re trying to emulate tricks made for different bikes and those other bikes do it better. We’re doing BMX and trials tricks on bikes that are obviously not suitable, and more power to those giving it a go, but it does come off looking a bit awkward. I’m not saying that we shouldn’t do these tricks, I just reckon we shouldn’t point a camera at people doing them. Unless they crash. I’ve always got time for a failure. And when it comes to fixie failure one thing holds true in fixies as in the whole fail field: chubby people do it best.
It’s funny but still I can’t help but think that the bike is only getting in the way of a really good laugh. Imagine if you gave the fat kid a swing rope…
But lets get back to the fixies.  All these tricks, don’t they just look a little bit like we’re on a slow-track to evolution? Twenty years behind the guys who have been doing street tricks for real on bikes that have evolved to exactly suit the tricks they’re pulling. Compare this fixie video…
With this randomly chosen guy on a trials bike…
I have it on good authority that Danny Macaskill is pretty much your average Joe in the trials world. It would appear that he has his own signature range of shoes but I’m assuming that was just a lucky break.
Given the evidence provided so far I have to conclude that either the tricks or the bikes need to evolve to make fixie videos worth watching beyond the 2 minute mark.
When I first got into mountain biking those bikes and the tricks they did on them were just evolving. At times it all looked kinda lame because you had guys trying to do tricks on 20kg full suspension bikes that kids on BMX were ripping to pieces already. But by and by the tricks and the bikes evolved and whole new categories of bikes were created, jumps/trials/trail bikes of all sorts that looked one part mountain bike and one part BMX. 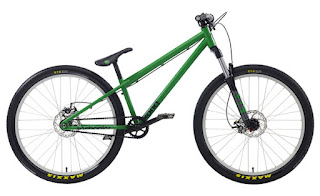 And I wonder, when I see guys on fixies popping off 1 foot ramps and generally pulling tricks I’ve seen elsewhere but making them look slow and cumbersome, I wonder if perhaps they’ve got the wrong bike.
The emergence of the 26″ fixie has been a slow burner. Could that be because a 26″ fixie is essentially just a mountain bike without disc tabs? Is this bike…
…really much different to this bike?
I’m sorry, the bike’s not so clear in that one. Try this one: 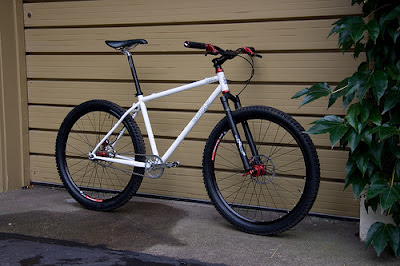 So if the bikes have no-where to evolve, what then of the tricks? Is it just the rolled-up cuffs on our pants that separate us from the apes on their trials bikes? Are we just inventing new ways to do skids?
Performing circus tricks but without the sense of humour…?
Or the fawning audience.
Some of you might remember a blog I wrote a couple weeks back about my attempt to go fixed. Fact is, I can’t even ride a fixie, so I’m not having a go at those who have a go at doing tricks on them. Like I said, more power to them. I just want to know what I do on a Saturday morning when I’m too lazy to actually go for a ride and You Tube seems like the answer. Just what do I watch?
Could instructional video be the answer? I might learn something I can try myself. This nice girl below comes from the more-is-less school of fixie design and my first thought was, “Dork,” but I reserved my opinion and persevered with the video. Sadly my thoughts were echoed around the 35-40 second mark by someone who very clearly says, “Dork.” Probably the guy filming her expressing his deep regret in having got involved in such a sad affair.
Part of the allure for me with fixies was that the fixie crowd seemed so pleased just to do basic tricks, like skidding. Whereas my mountain bike compadres were doing backflips. I was pretty much the master of the skid already so I thought to myself I’d buy in. Turns out the whole point of it was to skid without freewheels and brakes, all the stuff that made skidding so easy. This was pretty hard for an old curmudgeon to grasp because bikes had evolved beyond this shit years back. Skidding required a few muscles from the hand and forearm and could be performed effortlessly at almost any time, with the advent of disc brakes now even in the rain. Now suddenly even the great muscles of the legs and back combined can barely arrest a bike without proper training on a loose surface first…
You won’t see me trying to learn any of these tricks without brakes because old guy fails are pretty much as common as fat people fails. And that’s ignoring the fact that I can’t ride without brakes. So I might go do something I’m good at, like mountain biking, and leave the street stuff to people who are young enough to bounce back. But if I ever feel a need to do some street tricks, I’m not going to make it hard on myself,  I’m going to get a bike that has evolved specifically to suit the purpose, like the funny little bike in this video.
Though Lord knows all that heavy music is too loud for my ears.