Skip to content
If you’ve done anything a bit clever on the bike lately chances a friend has pointed a Go Pro at you or one of its close relatives. If they haven’t then perhaps you haven’t been trying hard enough. These things are everywhere. Or perhaps you should get your own camera and start recording yourself. That’s what I did.

The Go Pro has been such a massive success that it has spawned a thousand imitators. Some good and some not so good. It’s one of these imitators that I want I want to tell you about today.

It looks like this and its called an Isaw A1: 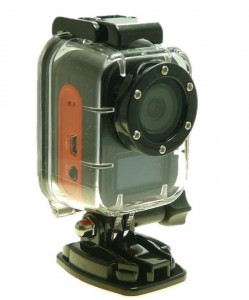 The design is not so exactly like the Go Pro that you’d sue but I look at it and I’m pretty sure I know where their inspiration came from. It looks quite attractive really so I’m not sure why they call it an Isaw. Probably they don’t mean “eye sore” they mean “I came, I saw, I captured the video”, or “Veni, vidi, video“.
The Isaw A2 ACE looks just like this: 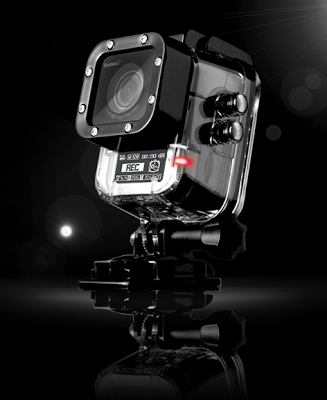 As you may have guessed, I was not the photographer for either of these two shots. (You’ll understand if you’ve seen my other photos.)
Both the Isaw A1 and A2 ACE are fully waterproof (to 50 metres), rugged and ready for action. The main difference between the two is the A1 shoots in 720p and the A2 ACE at 1080p.
The camera I’ve been using is the A2. Here are a few specs on it.

You get a good range of mounting hardware with your purchase. There’s enough there to cover most uses and then a few extra. The image below shows all the stuff you get with it. 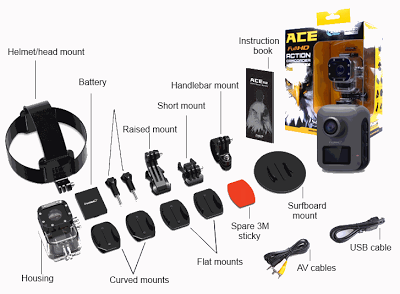 I started off using the handlebar clamp but the video I got with that was pretty shaky (or it flipped from side to side when I got out of the saddle and pedaled  forgetting how nauseous this would make the video). These cameras might come with image stabilization and all sorts of good stuff but they still rely on you, the photography, to do their part. I stuck the curved mount to a helmet and the video with that has been great. The Vimeo clip below shows what the video looks like when riding across a bumpy track. The track is much more bumpy that it looks and it’s all mean little wooden planks so it shakes you up pretty good. The handlebar mounted footage was okay but the helmet mounted stuff looks much better. Check this:
The mount is stuck on with 3M double-sided tape and believe me it’s not going anywhere. Your main issue with this stuff is making sure you get it in the right place first up because you won’t get a second shot at it. You’ll need a helmet that’s shaped to allow the mounting plate to stick. The skater-style lids are probably best best. Mine looks something like this: 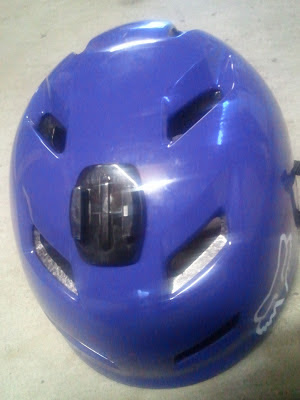 That’s the camera mount in the middle. (And yes, this is one of my photos, using the camera on the phone, but you get the general idea I’m sure.)
I haven’t yet used the surfboard mount but I have taken some video in the surf. The old booger doesn’t look a good candidate for accepting the surfboard mount and deadman’s board is used too infrequently to bother. I might mount it to a mate’s board or go shopping for a new booger. The headband mount is a solid piece of kit and the wide elastic band is rubber-coated on the inside. You could use this for mounting to a helmet, perhaps a mate’s helmet so he can record you and in all your glory, or you could strap a camera to your head and record the checkout process at the local Coles (if not for the footage then for the strange looks you’ll get). The headband could be a long term solution as a helmet mount for riding with the Isaw but not quite as neat and convenient as my solution above.
In 1080 mode it shoots at 30 frames per second. That’s plenty good for normal video but if you want to play back images of your mate falling on his arse in glorious slow motion you’ll want to use the WVGA mode which shoots at 120 frames per second. Here’s a short demo of the difference with some ceiling fans.

Of course, you’re probably not going to be shooting images of ceiling fans and that’s fair enough. I’ve pretty much captured the genre already.

Getting good footage in the surf is a bit of an artform and opportunities have been few and far between on the Gold Coast lately. I did venture out in small surf once or twice but can’t get excited enough about the tiny conditions to bother trying for more just now. The video below shows some of what we did on an overcast day with small waves. It’s on You Tube and the quality isn’t so hot. (I swapped to Vimeo, seen above, and got much better results. The Vimeo stuff can be toggled into HD by clicking on the HD button too.)

Not bad for a first try I guess but I won’t be submitting it for the AFI awards.

I took the camera down to Currumbin to get some underwater shots but missed the high tide by an hour and the rock wall was already exposed. There area couple of other good spots around town for snorkeling and I’ll be sure to post some underwater footage soon. These cameras can do scuba (because they’re 50 metre rated) but I don’t do scuba. I qualified years ago but all the equipment and carry on is more than I can be bothered with. It’s not exactly a sport in-line with a single-speed ethos, if you know what I mean.  I’m sure I’ll get some good underwater footage soon so stay tuned. In the meantime I have some video of my mutts having fun on a brilliant day at Currumbin.


I don’t want everyone to move up to the Gold Coast but if this video isn’t a good enough reason then what is? This was our quick foray to the beach after market shopping on Sunday morning. The Gold Coast is already full of people who don’t go to the beach or appreciate its charms (and noisy bogans who detract from its charms) but we can always use a few more single speeder/fixie types.

I’ve made various videos of me riding along the road but to be honest they’re all a little too boring to bother with. I’ll have to find something a little more exciting than suburban back roads before I publish. I did get one mountain bike ride in since returning from holidays in Vietnam and Cambodia. My fitness wasn’t too hot after the time away so I just did the one uphill and back down type ride. Looking back at this video I think now, “Boy what a lot of boring uphill you filmed” but at the time it seemed a central part of the narrative. Perhaps I suffered too much on the climb. I think that getting the best out of these cameras requires some creative editing and I’ll get better with time (or I’ll just keep boring people with the same dull stuff, who knows). Anyway, here’s the film:

There’s a narrative of sorts there, just not a very exciting one. The other thing that stands out about this video is you have to be going quite fast for it to look half decent. Most of the video looks like I’m virtually at a stand-still (and the really slow stuff got chopped, so you’re looking at the best stuff here). It’s all a learning curve though and you probably have to shoot a hundred hours of video to get some good stuff. I’m sure the pros leave a lot on the cutting room floor and they’ve got some of the world’s best to point their cameras at. I’m probably not even the best in my street. And it’s a short street.

There’s always fun to be had with these cameras if you think creatively. And when it comes to thinking creatively I reckon the stupid ideas tend to be the most fun. With that in mind I stuck a camera to my dog and got this.

I’ve been having the most fun with the time-lapse video. You can set  it up to record one frame at 1 second, 3 second and 5 second intervals. It’s all pretty simple. The camera records at 30 frames per second so at one frame per second you’re speeding things up by 30X. We recorded Luke assembling a computer in the Pogo workshop (which I won’t bore you with) and that video came up really well. The video below is my return journey from Nerang after the above mountain bike ride:

Another time lapse that may interest you more is the assembling of the Brown Jersey Divvy Van I’m currently testing (review pending very soon).

If at this point you’re thinking, wow these look awesome and he says they’re awesome so they must be awesome…then I better declare my interest in this. My company, Pogo, is the company reselling these. Just thought you’d better know that. Okay, so here’s the link:

I’ve got a lot of faith in these cameras and in due course we’ll be bringing in all the accessories and and full stock of both the cameras. They’ve been so much fun to play with and I’m only just beginning to understand how to get the best out of them. One thing that surprised me with them is what great family cameras they are. A friend’s wife took a liking to the camera and pretty soon had a bunch of footage of the kids playing in the pool. (Pool water is great to shoot in because it’s so clear.) The point and shoot versatility helped get some great footage. Then their girl was playing with the burst photo mode to get some stills shots of herself jumping into the pool. It shows that whatever you think you can do with these cameras is only a fraction of the story and someone else will always think of something different.

I’ll post up more stuff as it becomes available. I took some awesome stuff in 720p of a bag buckle swinging in front of what was otherwise some pretty cool mountain bike trails. I’ve got a bunch of stuff in 120 frames a second mode with a Camelbak nozzle swinging in front of it.  When I make these  videos I start to see why my mates with their Go Pros and Contours showed me so many hours of crappy video. I’m either developing a knack for finding new ways to stuff up otherwise interesting videos or else (I hope) I’m eliminating all the stupid mistakes. Stay tuned and I’ll be sure to have more video soon, like my Isaw dive video.

My advice is you’re only young once and the stuff you’re doing now you’ll never do again. Whether you get a Go Pro, a Contour, an Isaw or whatever, go and get a sports video camera and shoot some footage of you and your mates busting out some of the good stuff.