Skip to content
Goddamn this thing is good at squashing cane toads. It’s something only Queenslanders will relate to but the fat tyres do the job like nothing else I’ve tried. I don’t think any golf club was ever so efficient. Or even my mate Victor.

The Jube Hardtail is also good at finding watering holes. Seemed every time I took it out we ended up at a pub or café drinking beer or red wine. Or whiskey. Whatever. Something in the DNA of this bike says, “You have to take me out for a drink. Preferably somewhere where you can sit outside admiring me while you’re drinking.” 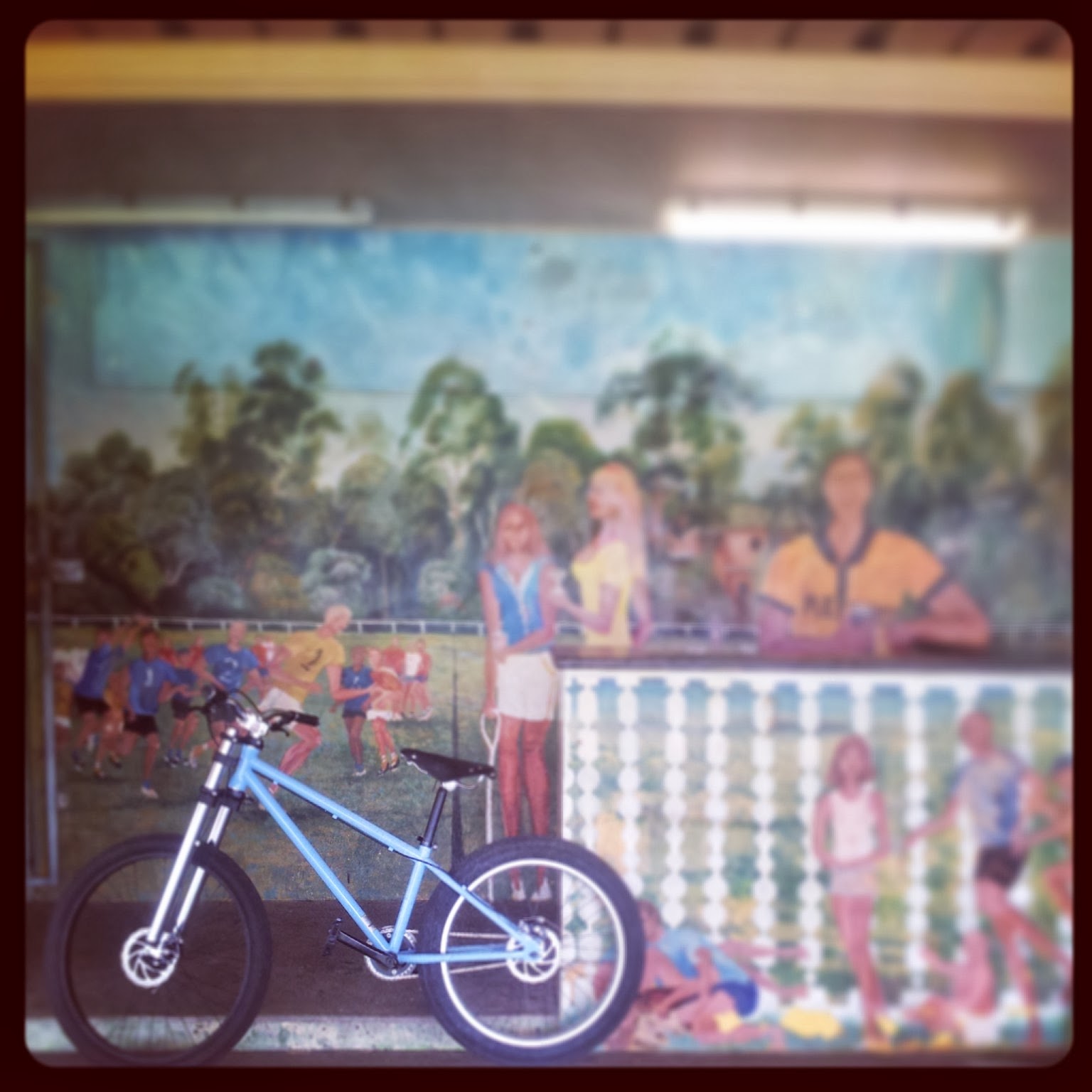 There’s a refined brutality to the design of this bike. It’s centaur-like personality means you can find in it things that exist in other bikes you’ve owned, or wanted to own, but I guarantee you’ve never owned a bike quite like this one. For those familiar with mountain bikes, there’s the pedigree there. Coming straight off the Cannondale Prophet onto the Jube Hardtail feels like a natural progression. But then if you start to think that this bike isn’t its own bike then you’ll be mistaken. It may feel like a mountain bike, or a BMX, or  jump bike (you choose), but it doesn’t play like one. It has its own distinct personality. And that’s part of the fun. 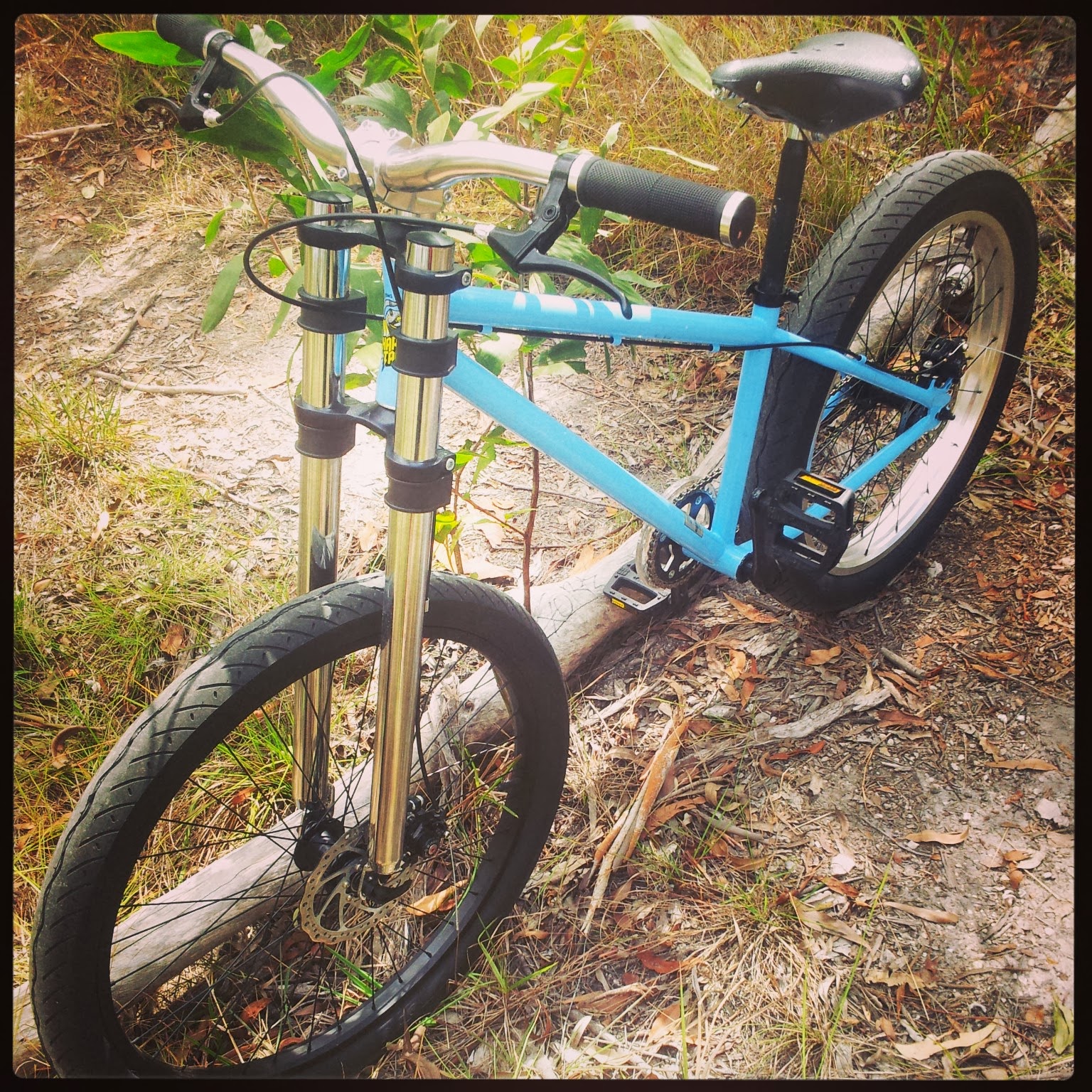 It’s human nature to look to things that are familiar for comparisons when describing something. (Or, I’m just lazy.) For me I can see the mountain bike in this bike but really it’s a cruiser. Or part cruiser. Or something. The big rubber front and back, the short wheelbase, those long chrome forks. They all make a statement. And that’s what a cruiser should do. 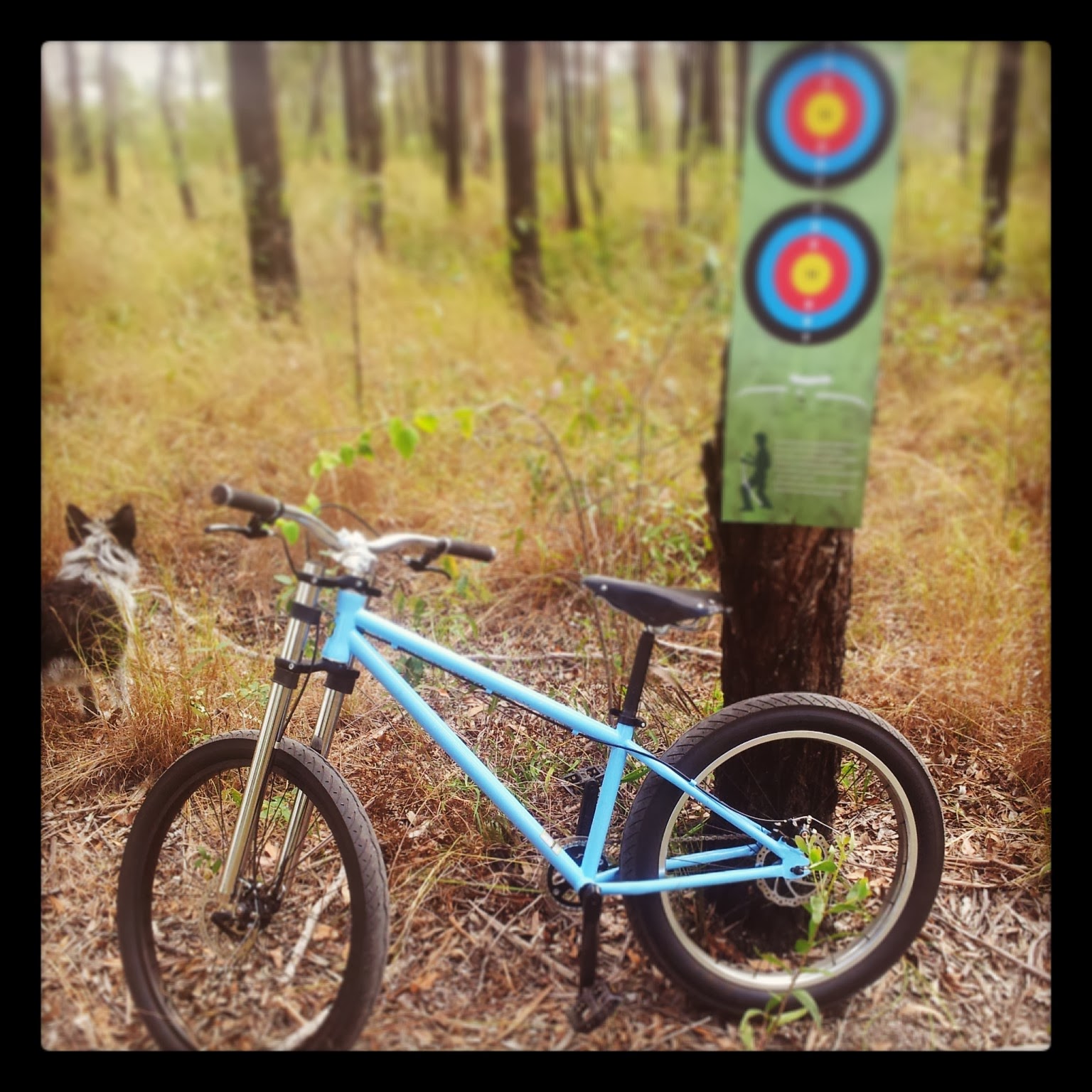 The Jube Hardtail baffles some people. If they don’t have a point of reference then they’ll wonder what the hell it is. But that’s part of the charm for you, if you get it. If everyone got it they’d all be riding one and you’d lose something important about this bike. That’s it’s unique.

A friend of mine took it for a spin and came back non-the-wiser. “Where’s the suspension?” he asked. “Why disc brakes?”

Here are the answers.
When you’re riding this bike, you’re the suspension.
Because disc brakes look cool. 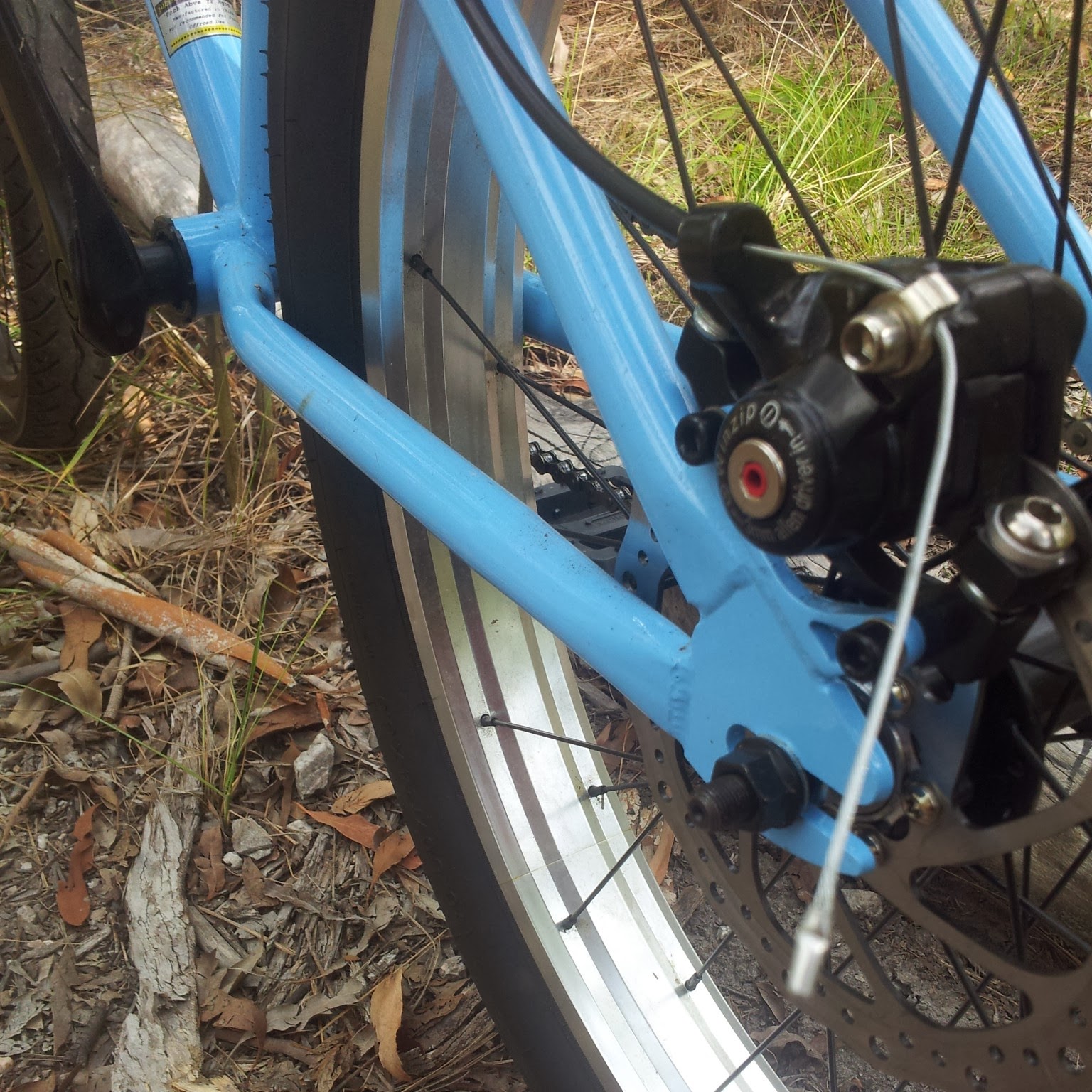 Disc brakes have other uses apart from looking cool but I don’t want to harp on them here. The bike’s main function is to look cool as shit and dorky talk about performance advantages of this over that would be pointless. But lemme say this, the bike stops hard. So much fat rubber coupled with disc brakes means this bike will dig up the pavement it stops so hard.

Getting it up to speed is another thing. It’s surprisingly easy to ride. It’s been geared down appropriately (compared with a fixie). But you know how you don’t see people riding their BMX across town? Well same with this bike. (I know kids will ride clear across town for a skate park but I said “people” not “kids”.) The seat is low and the stem short. The bike encourages you to reach a cruising speed and stay there. You can push the seat up a fair bit but that kinda defeats the purpose of the vehicle. Really, if you want the seat up and the bars stretched out then Jube sell fixies for that.

The Jube Hardtail peddles surprisingly well out of the saddle. You can get up to speed by standing on the peddles and riding. Then you can do the most awesome skids. Skidding really fat rubber is fun. Really fun. The bike is super stable despite the tight wheelbase and you can get sideways all day. 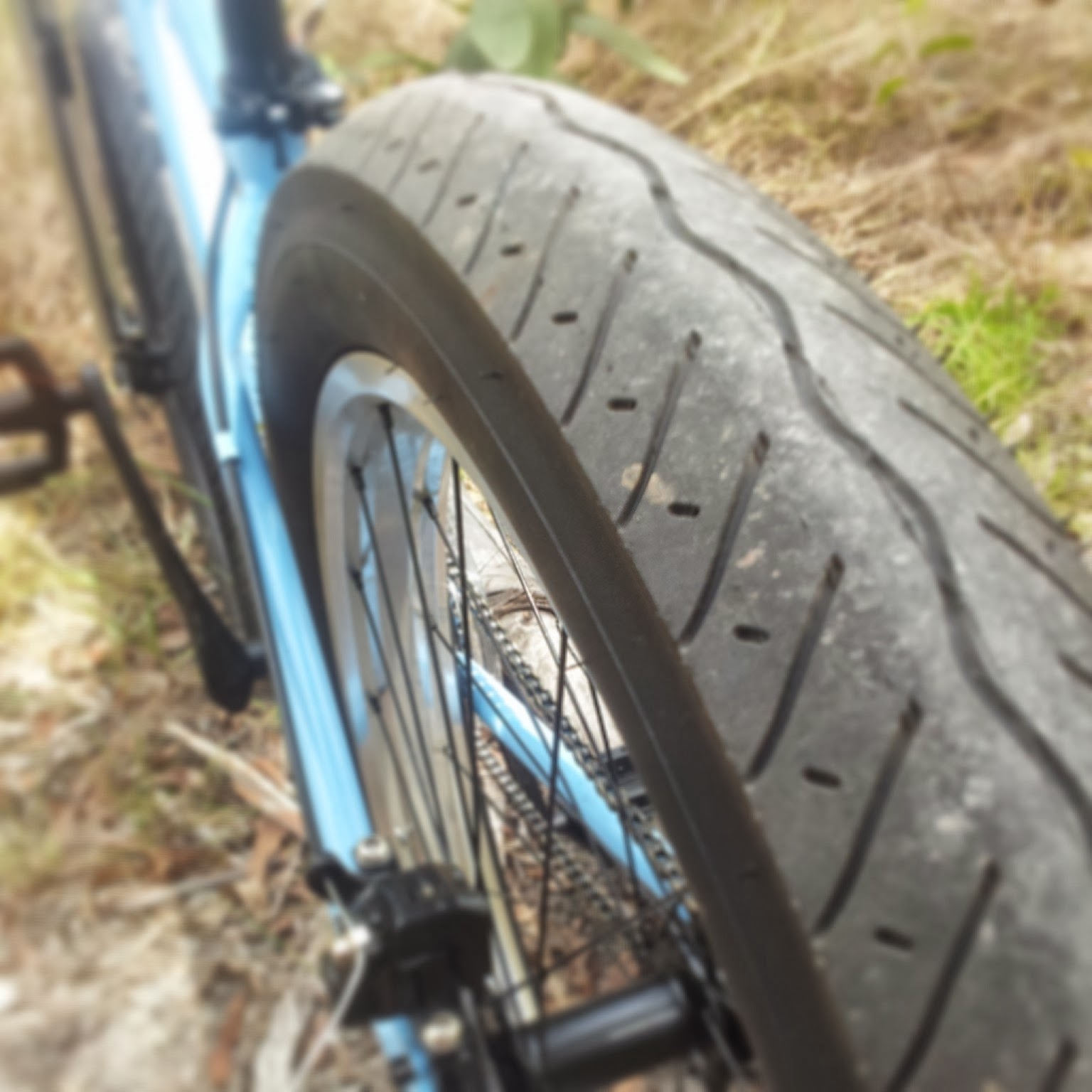 You can chuck this thing if you want. The Jube Hardtail is certainly beefy enough to take some punishment. But if you’re going to do it you want to bulk up. Or find a lip to launch off. Or bulk the fuck up. You have to get your technique right too. For someone like me who finds his technique sometimes turns to shit this bike could almost be considered a learning aid. If I don’t work at it on this bike I’ll do one of those embarrassing ones where the front wheel comes off the ground and then I make a funny kinda bobbing movement and nothing much happens after that.

I really enjoyed this bike’s sense of fun. And its split personality. You can sit in the seat and cruise or you can get out and get sideways. Being different to other bikes I’ve ridden or seen (or imagined) means I found new ways to find fun. Small things but fun. Like why ride at the gap between the gate and the fence when you can aim at the gate, lock up the rear and let the slope slide you into place? Yeah, small childish fun. But that’s what bikes are for. 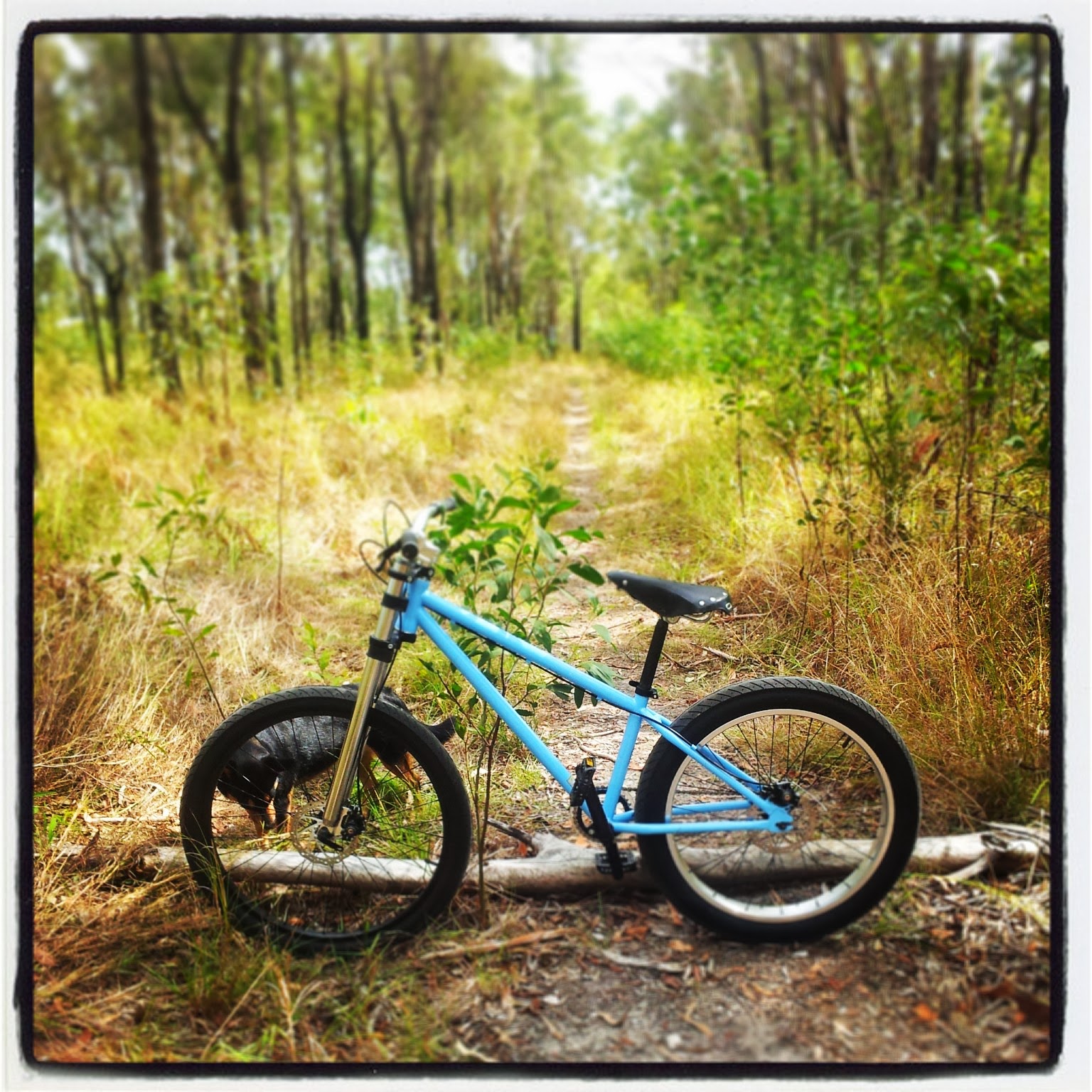 Something else fun with this bike is cornering. It’s all right and wrong in all the right ways. It has a short wheelbase with a raked out front end and those big-arse tyres. It’s tight and nimble combined with fat and it makes for fun from the get-go. You get the feeling you can chuck it into a corner but then the big rubber resists you and the fun is in working out what you can and can’t do. It feels good from day one but gets better as you get the hang of it. It feels like a motorbike at times. You can crank it over in a corner and trust the rubber. Just not like any motorbike I’ve ever owned.

You have to live up to a bike like this. I went out mountain biking in some clothes I threw together. No worries. But then I hopped onto the Jube Hardtail later to do a lap or two with the dogs and suddenly I looked like the kid who dressed himself. You know, blue boardies, yellow top, mismatched socks. I resisted the temptation to go back in and change. But it was there. 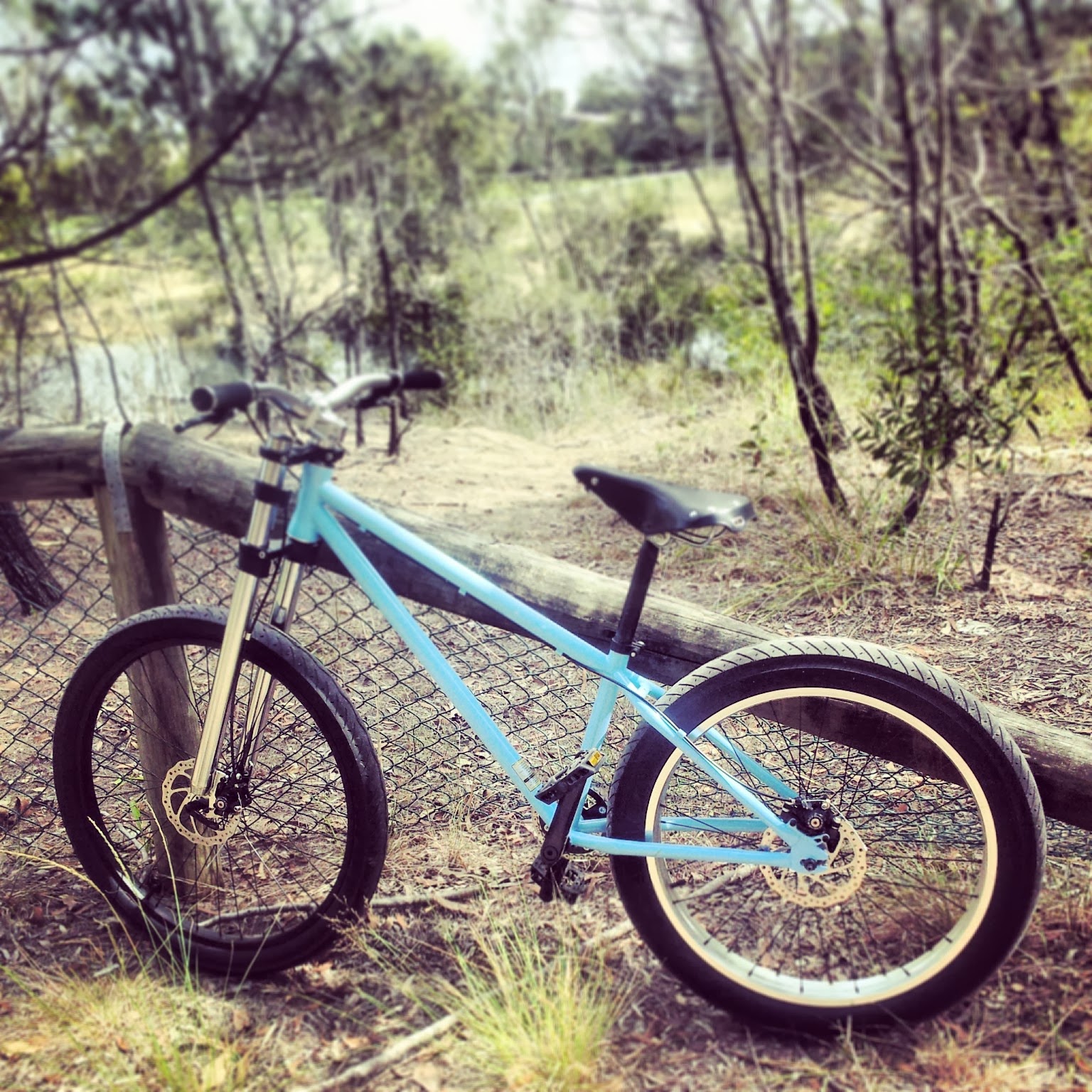 I like having bikes that make you want to find excuses to ride. I have the lovely Brown Jersey and that bike makes me find excuses for rides. I look at it and then I wonder, maybe Mike would like to meet for a beer somewhere. If you own a bike that’s just a bike then perhaps it’s the opposite. That might explain why there are so many perfectly functional but really quite boring bikes purchased and then rarely ridden. The Jube Hardtail will never be called boring. The Jube Hardtail might not suit every ride but it’s a bike that makes you conspire to find a reason to ride it. Which explains why I’ve spent so much time sitting in bars and cafes this last two weeks.

The Jube Hardtail may not be the most functional bike in your quiver but if it makes you want to ride then its done its job. Now I have to go because there’s a nice little bar down the road that needs a visit.