Skip to content
At Graveyard Train the other day I noticed that most people only have one style of dancing. Except me of course. I only have about half a style mostly revolving around bobbing up and down and the occasional flourish of energy. For many women the hippie-esque swaying of arms and faux-flamenco hand movements suffice. You know the style, the I’m escaping from a dream style of dance. It’s appropriate dance for Enya but looks kinda silly for Graveyard Train. Because this is how you dance to Graveyard Train:

Many of us cycling single speeds and fixies  have only one style of cycling. (Except me who…no that gags not gonna make any sense.)  I am personally quite comfortable pedaling along at the regulation 90rpm and struggle at anything much above or below that. Grinding into a headwind yesterday on the Mojo I found it hard to maintain a good rhythm. I would get a nice “wiping the shit off your shoes” pedaling action going for a bit before lapsing back into pedaling in squares.

I’d taken the Mojo because the Bureau of Meteorology (who cover weather, not meteors…so disappointed)  told me it was a 19 knot southerly. That’s a doable headwind with the Mojo’s gearing and the Mojo gives me a better gear for the return trip as compared with the more headwind/hill friendly Peugeot. The wind swung round to a blustery ESE and my tailwind all but disappeared but that’s another matter…the thing that matters here is that I run out of legs when the cadence rises much above 100rpm. And that’s a bit of an issue when you only have one gear.

The answer is of course training. You can train your legs to spin faster. Those of us who come to fixies with a track background (ie not me) will have trained their legs for higher spin rates. A good track cyclist can  comfortably spin at 130-140rpm. That’s called sprinting to me and can only be maintained for (very!) short periods.

I don’t suppose you’ll see me motor-pacing along the Gold Coast Highway but I’m going to make a concerted effort to increase my comfortable tempo. I’ll report back with news of my success later on.

The other side of cycling with one gear is strength. I make no promises there. Having got this far in life with these legs I don’t see anything changing. On the other hand I may have gone too far already… 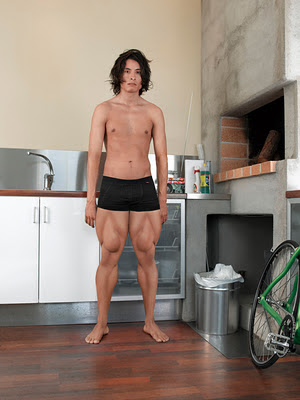