Skip to content
If you’ve been getting out at all lately you’ll have noticed that it’s been quite wet this year. I don’t think a single week has gone by that hasn’t seen me riding in rain for the last many months.

It’s taken its toll too. The last thing to pack it in was the Knog rear flashy. They might make a big deal about how waterproof these things are but when you’re riding through a Queensland downpour nothing comes out unscathed. To be fair to the Knog, it dried out okay and is more-or-less functional again.

I don’t mind riding in the rain too much. What’s been getting me down though is having a wet daggy arse hanging off me and a big strip of dirty water running up my back. As much as anything, it’s an insult to my intelligence. Really, am I not smart enough to prevent this?

So I did eventually go into the local bike store and purchase something that looks like this: 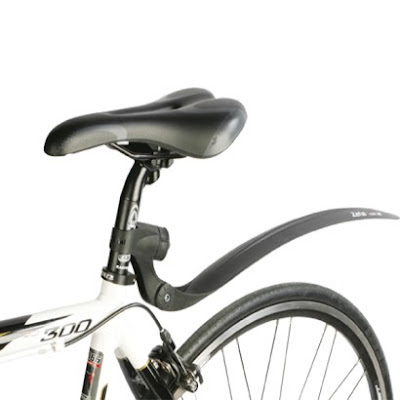 Obviously that’s not my bike its attached to because that looks like the sort of bike that might have gears. That picture is stolen from the Zefal website, makers of the Zefal Swan. Apparently Zefal sit around trying to out-do each other for terrible names and Swan was the worst they could come up with on this occasion. Pretty pathetic considering they already have the Deflector, Shield and Croozer. If misspelling cruiser isn’t the most god-awfullest way to name a product then I don’t know jack about swans.
God-awfulling name aside the Swan is a pretty good little unit for keeping your arse dry. I just rode 10k home from a visit to the family and despite the sudden downpour just before I departed I arrived home with arse dry and comfortable.
Of course, pretty much any fender will do that. What makes the Zefal  fella worthy of our attention is ease of use (on and off pretty quickly) and price (only $25). It looks reasonably discrete when it’s on the bike too. I’d take a photo for you but…come one, it’s a fender!
Not many mudguards will fit on a fixie. Clip on ones like this at least give us the opportunity to keep our bums dry and the choice to remove the fender should the weather ever improve. It’ll keep the spray off the Knog too so maybe it won’t conk out again.
You have no idea the virtues of simple pleasures until you arrive at your destination without the arse of your pants feeling like a wet nappy between your thighs. The Zefal Swan isn’t the prettiest piece of kit you’ll ever  see but at this stage it could look like that weird outfit Bjork wore to the Oscars and I’d still be loving it to bits.