Skip to content
Last week Brunswick Street Cycles went under. For those of you who don’t know Brunswick Street Cycles, they held a position at the top of the tree for commuter and interesting bikes. They had all your usual road/racer bikes of course, and they had a few of those lousy hybrid things, but they had a bunch of good and interesting bikes and they were popular as hell.

The original store was located in Brunswick Street, which is a pretty hip end of Melbourne. The street’s probably not as interesting as it used to be but it can still be a little wild. I was down there  last Saturday and ended up partying with a tall and solidly built drag queen, another guy with a generous supply of bubbly and a woman who couldn’t do much more than mumble drunkenly things like, “I’m a good lesbian.” For years Brunswick Street was the place to be and Brunswick Street Cycles was the eponymous hub for all the groovy people who cycled there. It was a place that naturally attracted anyone wanting a upper-end fixie but also accommodated ladies with step-throughs needing some mudguards. 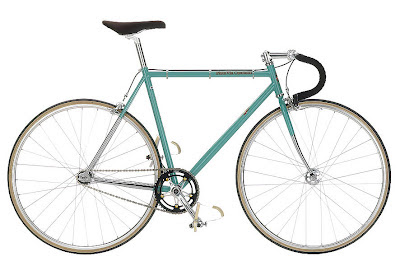 As usual, internet shopping is cited as a reason in its closure. I would suggest that growing pains could be part of it too, they now having a store in expensive real estate in the middle of the city and another out in Greenborough (which I remember vaguely having been there years ago, it’s somewhere in the suburbs but not my end of town). It seems that these days you probably have to go big if you want to survive. I can’t think of too many corner store bike shops still left standing.

To me, their list seems less interesting than it used to. That perhaps reflects a drift toward the middle as they grow. It’d be hard to maintain a niche as you get bigger and hard to interest people out in the rolling green hills of the burbs in a fixie. It seems an inevitable but disappointing process that as we age we become more conservative, bike stores as well as people. It’s sad to see its demise though. Hopefully someone can resurrect BSC and give us an interesting place to go shop for bikes once more.