Skip to content
If you haven’t already bid on this bike it’s probably too late. Yesterday the carbon tax was introduced and it’s my understanding that from now on carbon bikes will be so expensive you’d be lucky to afford one even if you were an internationally renowned blogger of single speed nonsense. 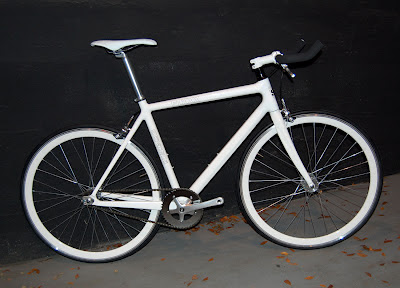 That need hardly bother 99% of the fixie community who are so obsessed with steel (because it’s real) that they’d rather buy a bad steel fixie over a carbon or alu one any day. It’ll certainly hit hard at all those poseurs who wear spandex and ride in circles on team replica bikes.

According to some sources it’s not just carbon that’s being taxed though. They shouldn’t call it a carbon tax if that’s true. For instance, methane is being taxed too. By example, say you’re the owner of a rubbish dump that generates more than 25,000 tonnes of “greenhouse gasses” (I know, it’s so confusing) then you’ll pay the carbon tax too. Apparently the days when you could dump your shit in just any old hole are done with. Now you have to recycle and re-use. Or you syphon off the methane and use it to generate electricity and sell it back to the grid. Or if you’re really stupid and lazy you just go ahead dumping shit like you can go on growing holes forever and you pass on the cost of doing that to your dump users and cry about how the government is screwing you over.

What worries me though, as a small business owner, is how it’s going to ruin my business. When not goading my team of exploited labour to write this blog for me I run this company, which despite being millions of everthings under the threshold and getting tax write offs and compensations, I’m assured it’s just about the end for me and everyone like me. Such a shame, all this effort just to prevent a few poseurs from riding round on their carbon frames.

What I’ve always wanted was a tax on pollution. As someone who has always ridden a bike and so often choked down the fumes from the million other vehicles on the road (that all have engines) it seemed to me only fair and just that you if choose to fuck up the air we breath then you should at least pay for it. Sadly we’ve got this strange tax on carbon bikes instead and it’s all the end of the world as we know it (if you believe the hype.)