Skip to content
Despite the words of the great sages of my time, history does repeat. Every couple of years someone else drags out the airless bike tyre idea. It seems that every couple years someone gets really excited about the idea of the solid bicycle tyre and I feel like a hard-bitten old cynic (some truth in that) when I fail to share their enthusiasm.

I can see the advantages of airless tyres and I once got excited too. But that was many years ago and as each iteration of solid bicycle tyres come and go I fail to see anything that I would be interested in putting on my bike. The idea of never having to worry about flat tyres is awesome though, like the idea of a perpetual tailwind or drivers who aren’t dangerously distracted or filled with an inchoate rage.


If you do a quick google of airless tyres you’ll find that there are already many out there. For some reason they’re mostly represented by strangely unattractive websites like this one:

The athlete on the front, Bud, has won five triathlons on his Air Free tyres. That’s great because not only did he do it with no air in his tyres but also with a pack rack and reversed bar-ends. 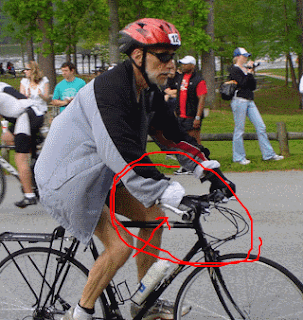 Bud’s awesome (as is my graphic artwork) and I’m sure he’s kicking it in his age group triathlons, but I’m not about to get frothy at the mouth excited just because some dude with backwards bar ends rides on solid tyres.
Of course, if you don’t like Air Free then maybe you should try Green Tyres. They have a slightly more appealing website and a list of tyres in almost every size: 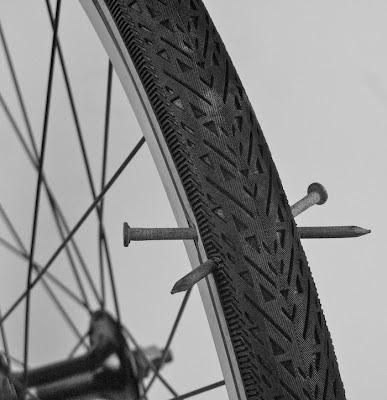 I’m assuming the one you buy doesn’t come with nails pre-installed. I think the photo above was just the result of some kind of clumsiness in the office.
As you can see from the image above, Flat Free rocks in the real world, but that always leaves me wondering, how’s it work in the cartoon world. Well, I wonder no longer:

What intrigued me about this video is that it’s a Hutchinson video, Hutchinson being the guys who make millions of tyres every year already. The answer is in the Flat Free text:

Last year a company developed and introduced the no-flat tire used in our system.

“A Company.” As in, Hutchinson, one of the biggest tyre manufacturers on earth (and therefore, I’m going to say, the solar system).

What @cme (ACME) has done is to build professional-quality aluminum wheels in Southern California, pre-mount the tires, and ship them directly to you for installation on your bike.

So this start-up is going to pre-mount the tyres for you onto wheels and ship them to you. Hmmm. And let’s say you do more than 3,000 miles, what you do then is put your wheel back in the post and have them mount new tyres. Presumably during the week it’s away you ride your old pneumatic tyres and the laws of the universe being what they are you get three flats. That “3,000 miles” figure probably doesn’t take into account the way fixie’s are ridden. If you’re fixed you can probably read “500 miles” or some other figure that represents a couple months of skidding.


The airless tyres add about 1,400 grams to each wheel. (I love it when Yanks slip into the new millennium and start talking metric.) That’s close to a kilo more than a standard tyre/tube combo but it’s not outrageous. I went through a bad patch on a commute some years back and through my flat induced paranoia ended up with downhill tubes and tyre liners on my MTB commuter and I felt like I added about 15kg of rotational mass to my bicycle (though of course I’m prone to exaggeration). At the time it was worth it to know I wouldn’t flat again on the glass strewn bicycle paths of the Gold Coast. (Bike lanes are just a convenient place to smash bottles and for tow truck drivers to sweep debris.)


Our Kickstarter pals have a modest goal of raising $1,000 dollars and they’re a third the way there. My understanding of Kickstarter is that you reach your goal or you get no money. Now I wonder how they don’t have $1,000 of their own. I see in the video they own a pretty flash ute and they’re busy screwing nails into the tyres of a sweet looking lugged fixie and yet they can’t pull a grand out of the bank for their own project? 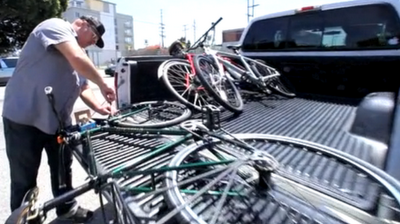 Well let’s say you want to support our friends at Flat Free and you have a spare $280. That gets you a set of wheels with Flat Free tyres pre-mounted. And that’s not a bad deal.  For someone like my wife that could be the last set of wheels/tyres she ever needs.

My concern about all these solid tyres is that they might ride awful. Each iteration perhaps rides a bit better than the previous generation but I can’t see a day when they’ll match pneumatic tyres. I sometimes run Slime or similar product in my tyres and I can notice the loss of sprightliness straight away. I can only imagine that a solid tyre that feels equivalent to a tyre “with 60 pounds of air in it” and weighs well over a kilo actually feels pretty awful.

I’d love to be wrong and one day be rocking some puncture proof tyres. Until then I’ll just make sure I never venture out without my spares.