Skip to content
Really? Our bike paths are shared with fucking segways now?

Segways have long been the transport alternative for those who want to stand up during transit. Too many seats on your peak hour train? Get a Segway. Mobility scooter too comfortable? Get a segway.

Apart from the guy at the cricket who rides around on a segway filming the action, and occasionally crashing into it,  I can’t see any reason for them. Besides being slow, cumbersome and expensive, they’re also really wide. They take up a lot of bike track.

The segway inventor plunged to his death in a “freak accident“.  By freak accident they mean a freak went over a cliff. That the accident was in any way unexpected or unlikely given that a segway was involved is disputable. How more segways don’t end up going over cliffs is beyond me.

The segway answers a problem that never existed. Mobility scooters perfectly service the market for people who are too old, too frail or too lazy to find alternatives. The segway does nothing the mobility scooter doesn’t already do (doesn’t even give you a nice flat lap for your rug and scruffy little doggy) but it exempts all of the above from using them. If you’re old, frail or lazy you have no use for a segway because you don’t want to stand up the whole journey. There really is only one category of person left for the segway. The stupid.

And we don’t need more stupid people on our bike paths.

As an example. I came round the corner of a bike path on the weekend and saw this: 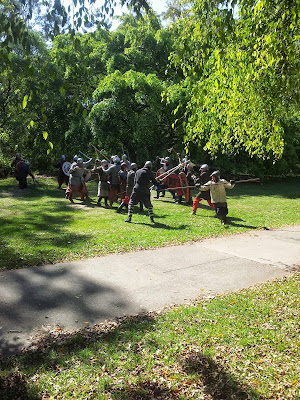 Yes that is a bunch of grown men pretending to be knights and killing each other. Here’s a picture of them after some of them had “died”. 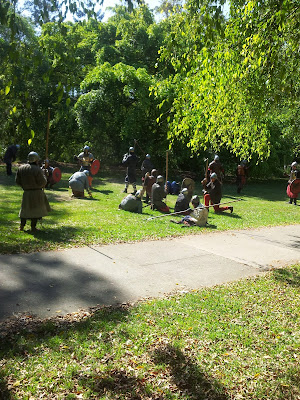 That’s (mostly) harmless fun. What I was actually going to tell you about was the people playing badminton over the bike track, using a picnic blanket for a net. But I don’t have any photos of them. They had the “net” suspended across the bike track. When we came around the corner they seemed genuinely surprised and called out “sorry” to us as we cycled around them. Yes, who would have expected cyclist on a cycle track in the heart of Brisbane?

Back to the fucking segways though. The problems with segways are manifold but the worst is they’re just so fucking boring. So people riding them spice up life by doing little left and right swerves. Across the bike track. In the heart of the Gold Coast.

Life never gets that boring for cyclist. We’re cycling for starters and that’s fun. Then we get to lean into corners and jump gutters and spice up life in ways that segways couldn’t dream of. And we’re fast too. And then we have cartards to contend with. And aren’t they a freak load of fun.

A cartard yesterday told me off for not indicating. I had looked over my shoulder and eyeballed him, moved to the middle of the lane, and in all ways had a body language and road position that indicated I was turning at the roundabout. Not that it mattered. What difference does it make to a car following whether they know I’m turning? Anyway, as he drove off he called our to me sweetly, “You didn’t fucking indicate you wanker,” and so I gave him the only indication most cartards will ever need: 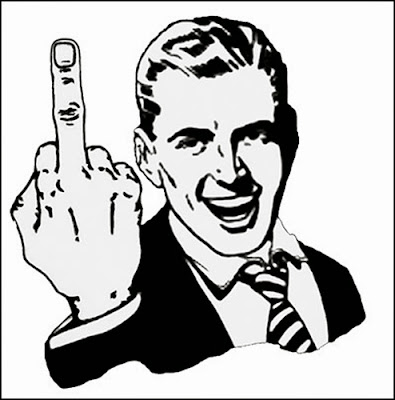 Apart from that  one, there really is no indication I could think to give a cartard these days that would warrant me lifting my hands from the handlebars. Especially not while negotiating a chopped up road around a Gold Coast roundabout.

I try to be nice to the cartards though. If I think they can genuinely benefit from an indication I’ll give them one. And one day I expect, if I live long enough, one of them will return the courtesy.

There was some talk about our local police trying Segways. I don’t know if this was talk among the local police or just from the usual idiots who talk nonsense:

I find it hard enough to keep respect for policemen when they’re on bicycles. I had two clowns on the road the other day, chatting to each other and swerving all over the road. I had to swerve into traffic to get around them when one clown swung out without looking so he could get alongside his mate. It was getting dark too and of the three of us I was the only one with lights. Or brains. When a car cut me off not 20 seconds later I didn’t bother  looking to them for justice. They were probably fiddling with their gears at the time.

Put anyone on a Segway and they lose respect. Putting police on Segways would be like putting the pope on a pogo stick.

Of course, what appeals so much about Segways is they’re a complex solution to a simple problem. For many people (read: morons) it’s hard to resist the black hole allure of a silly solution. At close to $5,000 each the Segway is the transport alternative for anyone who doesn’t know you can by these at $300 a pop: 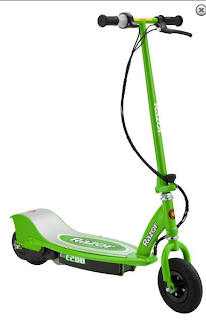 Of course, the Segway is no more stupid that getting about on a device with mutli-coloured wheels or wooden handlebars, and I’ve certainly done both of those recently…