Skip to content
The heading for this blog might almost rhyme except it doesn’t. I read somewhere that mixte is pronunced “meeks”. Or something like that. I don’t pretend to to be a linguist. (Though I did once have an inclination to move to Bilinga so I could be Bilinual.) All I know is Cadel’s not riding one through the Giro and that’s why I’m not watching. That and Nibali has him on toast, unfortunately.Of course, we all say mixte with an accent on the “e” so that’s why my blog title works. You know, because we’re all misinformed dolts.The point here is the mixte fixie is now a real bike taking up space in my shed, not a collection of parts taking up space in my shed. Inspiration struck on the weekend (as well as the realization that I had all the parts I needed to build it) and several hours later a proper running bike emerged for a test ride.

It wasn’t meant to be a mixte fixie. What I really wanted from the bike was a sedate shopping cart or running with the dogs bike. The kind of bike that rarely breasts 20km/hr. Fixies require just a little too much attitude and concentration for lazy toodles around the block. The mixte became a mixte fixie because I had a bunch of parts left over from the Hasa redux (that Chris donated to me, thanks Chris!) and it was a natural way to build the bike (assuming I didn’t want to spend any money on it, which is always a fair assumption when I’m involved). Being fixed also killed a couple problems, like trying to get the old brakes to work. I also bolted on the moustache handlebars, which were struggling with existentialist crisis after being shelved almost indefinitely.

The parts from the Hasa are all decent. You can feel the notchiness in the hubs when you spin them in your hand but when you actually bung them on a bike they feel fine. Likewise the cranks, heavy and a little on the ugly side, work perfectly well. The brake levers are something I wouldn’t let grace my other bikes but they pull up the mixte no worries and don’t look disconcertingly ugly on the old Peugeot. I can see how the Hasa represents good value and will get you about in style for cheaps. It’d make a fine second bike or school/beach/pub hack. Of course, the Reid Harrier is only $50 more and represents a world where far fewer compromises have been made to reduce costs. 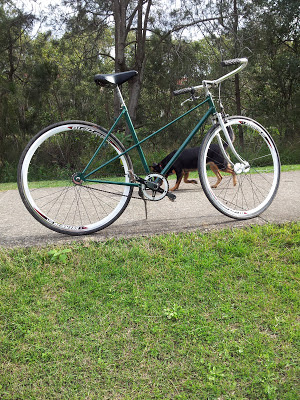 The Peugeot mixte was built in an era before metric and so it sported 27 inch wheels. The ride is a conservative one and even with the 700c wheels from the Hasa it still rides very nicely. The main drawback is ground clearance. At the kind of elegant speeds this bike is designed for it’s not a problem but at speeds even slightly frisky the pedals strike the ground when cornering.

I’ll need to shim the seat post next weekend to stop its declining ways but apart from that the bike is ready to roll and a pleasure to ride. I’m going to put the mudguards back on too. And if Cadel wants to come round for a ride when he’s finished in Italy I’ll let him have a go.